The imposing monumental staircase which was built in 1725 by architect Domenico Rossi and commissioned by  Patriarch Dionisio Dolfin leads the visitor to the first floor where the exhibition section of the Museum is located and to the main floor with its beautiful rooms frescoed by Giambattista Tiepolo. It is also possible to admire the fresco by the same author entitled Cacciata degli Angeli ribelli, (Expulsion of the Rebellious Angels) on the ceiling of the monumental staircase, of 1726, a work of admirable late baroque illusionism surrounded by eight monochromes depicting episodes from Genesis.

Built by Patriarch Francesco Barbaro in the 17th century, the Throne room, or “portraits room”, was frescoed from the start with the portraits of the Patriarchs of Aquileia. This tradition was resumed by Dionisio Dolfin in 1729, who entrusted a “better painter” with the task of bringing back to memory the appearance of his predecessors. The current aspect is one of an impressive gallery of 117 portraits which include the first Pathriarchs of Aquileia to the latest Archbishops of Udine, who are still portrayed here at the end of their apostolic mandate. On the ceiling of the room, surrounded by an elegant wooden gallery, is a fresco representing The mission of Saint Hermagoras by Domenico Fabris (1859).

The most atmospheric room of the main floor of the palace is the so-called Galleria degli ospiti (the Guests Gallery) built under Dionisio Dolfin in 1718 to create an area in which guests could be welcomed before the audience which would have taken place in the nearby throne room. The fresco decoration was assigned to Giambattista Tiepolo between 1727 and 1728. He was supported in his work by Gerolamo Mengozzi called “il Colonna”, his trusted painter of quadratures. The expert use of perspective by the latter combined with the liveliness of Tiepolo’s painting are still able to give to the visitor’s eye an ornamental complex of absolute pictorial freshness. The narration includes some of the most important passages of the lives of the three Biblical figures who, in Dolfin’s opinion, represented the first patriarchs in history: Abraham, Isaac and Jacob. Certainly the central panel with  Rachele che nasconde gli idoli (Rachel hiding the idols) thought to depict Giambattista Tiepolo, his son Giandomenico and wife Cecilia as well, is rich in suggestive traits.

Meant for solemn rites, the Palatine Chapel was built in 1593 under Patriarch Barbaro but its current aspect is due to Dionisio Dolfin (1710) who ordered some structural work as well as the stucco work altar by Abondio Stazio and the realization of the canvas on the ceiling representing  L’Assunta (Assumption) and Ss. Ermacora e Fortunato (Saints Hermagoras and Fortunatus) by Nicolò Bambini. At the centre of the altar it is possible to admire the altarpiece by Jacopo Palma il Giovane (1628), representing La Vergine col Bambino (Madonna with Child). The two tondoes over the doors leading to the vestry of the chapel are attributed to Tiepolo and represent San Carlo Borromeo (St. Charles Borromeo) and Sant’Antonio da Padova (St. Anthony of Padua).

The Sala rossa (The Red room)

The room, also known as the “Court room” as it used to be the seat of the Ecclesiastical court, presents an extraordinary fresco depicting the Giudizio di Salomone (The Judgement of Solomon) painted by Giambattista Tiepolo in 1729.

Here Tiepolo displayed all his extraordinary technical ability with a special effect of views and perspective expedients by which he depicted a complex narrative, starting from King Solomon’s multicoloured court and going through to the far side with its dramatic scene of the event threatened by the hireling.

The Sala gialla (The Yellow room)

A triumph of light, white stucco work on a golden background which represents the Theological Virtues and the Arts: so appears the yellow room to the visitor’s eyes. In the sky are depicted the three theological virtues (Faith, Hope and Love). Towards the centre of the room, supported by two cherubs, is the coat of arms of the Dolfin family: three golden dolphins in a blue field. The stucco work in the corners represents instead the allegories of the Arts: Music, Poetry, Painting and Sculpture  In this room too, as in the red room, the stucco work is by Giovanni Maria Andreoli (18th century).

The Sala azzurra (The Blue room)

On the main floor, among the rooms which treasure Giambattista Tiepolo’s frescoes, there is a room which enshrines a little jewel of 16th century painting: it is the sala azzurra (the blue room) or “del baldacchino” (the canopy room) also known as the “Giovanni da Udine” room after the name of the author who the grotesques which decorate the vault of the ceiling like a delicate embroidery are attributed to (16th century). The evangelical episodes depicted in the four panels on the ceiling are by an unknown painter, whilst the central painting is by Giambattista Canal (1807).

Patriarch Dionisio Dolfin had the Patriarchal library built between 1708 and 1711 to preserve properly the precious book heritage already collected with passion and devotion by his ancestors and enlarged by the acquisition of various texts of particular value by himself.

It comprises about 10,000 volumes, among which over 150 incunabula, 800 manuscripts, various precious liturgical codes - Jewish and Greek -, some autographed letters of eminent people and other important texts which certify the cultural variety of the library. The structure is a triumph of wood, the material the bookcases, enriched with allegories and cherubs, are all made of, outlining a highly symbolic and refined tale devised by Patriarch Dolfin for the library as well as for other rooms in the building. Worthy of note is the large canvas on the ceiling which represents the Trionfo della Sapienza divina (The Triumph of Divine Wisdom) by Nicolò Bambini  (1712). 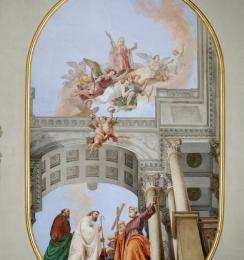 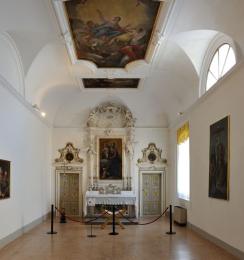 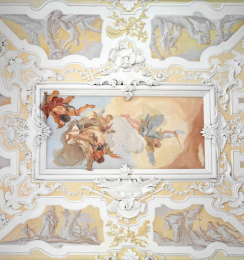 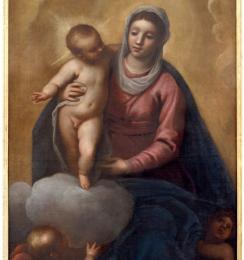 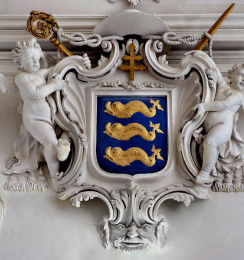 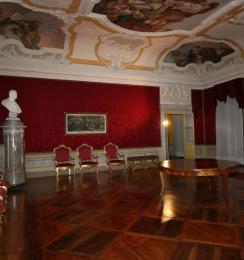 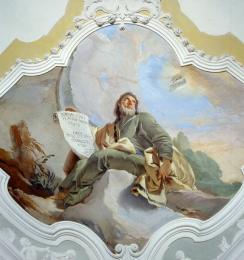 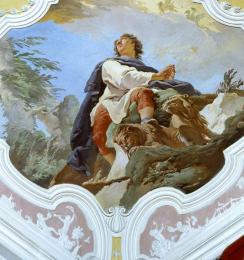 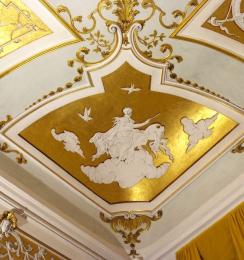 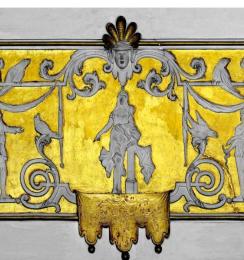 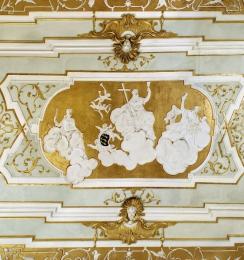 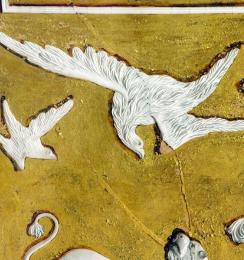 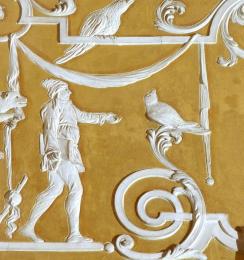 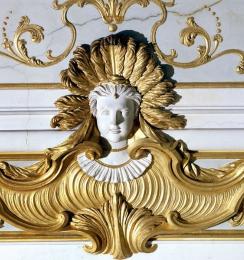 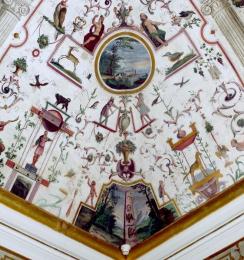 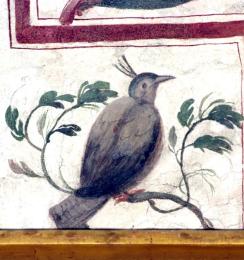 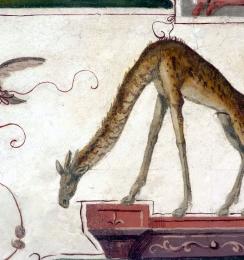 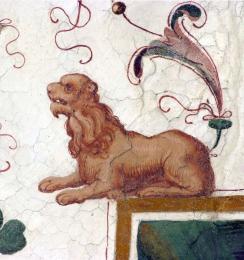 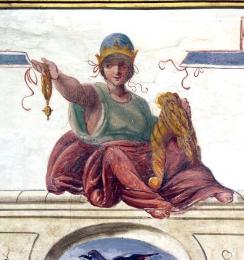 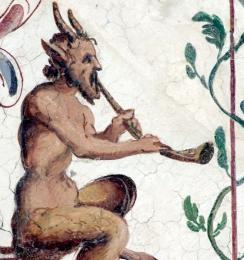 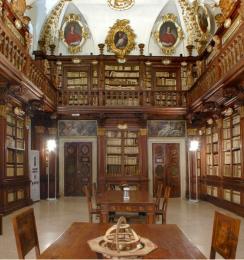 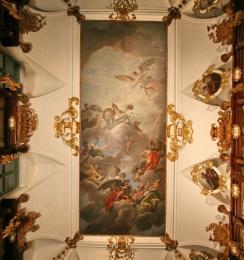 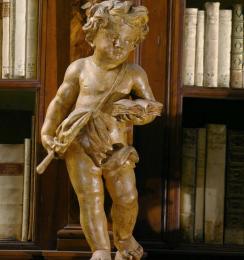 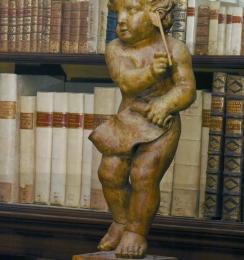 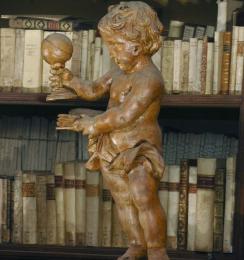